Did you ever wonder what was living in that drip tray in your department’s shared coffee machine? Neither did I. But a few researchers at the Universitat de València in Spain did. And what they found was pretty interesting.

Like all good research, I’m sure this project was born out of curiosity that then morphed into something more interesting: a study of how bacterial communities respond to strong selective pressures. You see, the caffeine in coffee apparently has well-known antibacterial properties*, which makes it a strong selective force on bacterial communities that live in caffeine-rich environments. And that’s just what Vilanova et al set out to test using their fancy Nespresso machines.

“We sampled the coffee waste reservoir of ten different Nespresso** machines and conducted a dynamic monitoring of the colonization process in a new machine.” 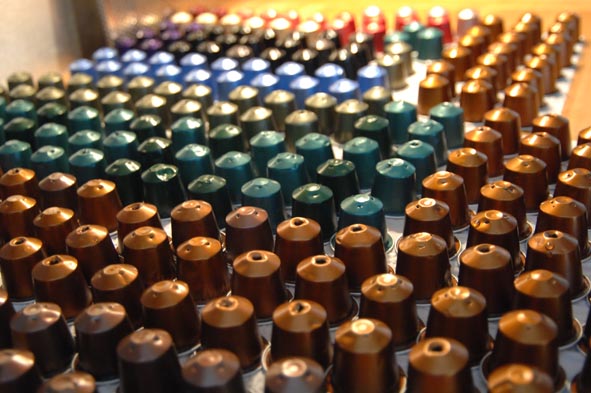 Briefly, they collected the “coffee leach waste”*** from the drip trays of these machines and conducted 16S rRNA amplicon sequencing. They found that one of the two most common bacteria genera in all of the machines was Pseudomonas — a genus with known caffeine-degrading bacterium. However, it was not the case that all of the bacteria present were known (or even suspected) to be caffeine-adapted. In fact, the authors found lots of microbial diversity, which suggests that many bacteria (unsurprisingly) have some level of tolerance to variation in caffeine and pH levels.
The authors summarize it thusly:

“Our results show, for the first time****, that coffee leach from standard capsule machines is a rich sub strate for bacterial growth; that caffeine content does not prevent a rich bacterial biodiversity from rapidly colonising coffee leach; and that microbial succession from an initial pool of generalist bacteria gives way to an apparently coffee-adapted but still highly variable bacteriome.”

The implications of this work are two-fold:

So, just clean your coffee machines…or don’t use the communal one.

This is what the business world calls a “deliverable”, which means that the authors will surely be highlighting this in their next grant report!
REFERENCE
Vilanova C, Iglesias A, Porcar M (2015) The coffee-machine bacteriome: biodiversity and colonisation of the wasted coffee tray leach. Scientific Reports, 5, 17163. doi: 10.1038/srep17163
*Now I know what I can use the next time I’m in the field and run out of neosporin).
**Do you think Nespresso knew that they made such a scientifically useful machines that “are highly standardized coffee making devices (same capsule type, same basic design, same pressure: 19 bars), and…represent a unique oportunity for a massive biological screening.”?
*** IMHO this is more disgusting than the fecal, armpit, vaginal, etc. samples used for other microbiome analyses.
**** I find this qualification pretty humorous.